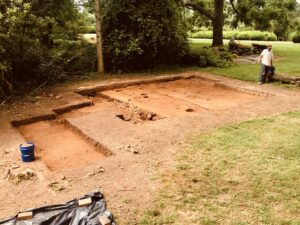 Historic Sandusky is a historic site located on four acres in Lynchburg, Virginia. It was a privately owned house until 2001 when the nonprofit Historic Sandusky Foundation was formed to purchase the property and develop it as a heritage tourism site with a focus on the Civil War in Lynchburg. During the June 17-18, 1864 Battle of Lynchburg, the 1808 home “Sandusky” was seized and used as a headquarters by the Union army. In the years since inception more than $3,000,000 was raised and used to restore the house to its Civil War appearance, a visitor center was built, videos and audio programs were created, and a Civil War Trail established in Lynchburg as part of the Virginia Civil War Trails program. The Lynchburg Civil War points of interest are now connected and interpreted by markers, brochures, an audio tour, and a map. The themes covered by Historic Sandusky focus on the Battle of Lynchburg, Hunter’s Raid, Lynchburg as a Civil War medical center, and Lynchburg during the Civil War. The foundation has recently begun to extend the understanding of the site beyond the Civil War and has initiated work focusing on the enslaved population of the plantation and their roles in the history of the site.

In 2011 a partnership was established between the Historic Sandusky Foundation and Lynchburg College (now the University of Lynchburg) which resulted in the University taking over full ownership and operation of the historic site in 2016. The foundation continues in a fundraising and advisory capacity. In addition to serving the public, Historic Sandusky now serves as an experiential learning center for college students in a variety of fields including history, museum studies, archaeology, environmental science, and marketing. Under operation of the University, a library was established and artifact collections expanded. While the academic focus of Sandusky has been to serve University of Lynchburg students, it has mentored students from local high schools and other colleges through research assistance and internships. 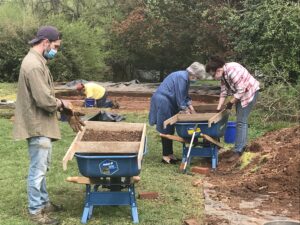 An archaeological field school was hosted on the property through University of Lynchburg from 2011-2015, where students found a partial foundation of a detached structure on the east side of the main house that aligned with the location of the original kitchen as indicated on early insurance documents. This was investigated further by archaeologists in Spring 2021 when twenty-six 5ft. x 5ft. excavation units were opened in the vicinity in order to expose the foundation and probe the surrounding area. Three corners of the kitchen foundation were uncovered along with a large contiguous work yard to the west of the building.

The goal of this project is to undertake an archaeological excavation of the remaining portions of the kitchen site, conduct artifact conservation, and complete analysis of the findings. One likely subfloor pit measuring approximately 3ft. x 5ft. was left intact during the initial excavation along with another possible subfloor pit and several smaller, unidentified features located inside the footprint of the structure. The subfloor pits may contain a wealth of artifacts used by the enslaved people that lived in the kitchen, such as beads, seeds, decorative objects, or religious paraphernalia. The location of the fireplace where the meals would have been cooked has yet to be found, however archaeologists suspect two external end chimneys are present which is a common style for structures of this size and period. 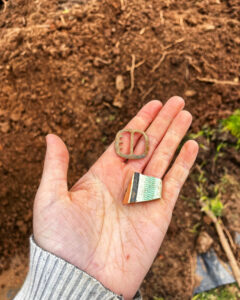 Antebellum detached kitchens are significant historical and cultural resources. They were the crossroads where the white and black communities of a plantation met and interacted, and they were also largely the domain of enslaved women and children who worked there. Kitchen sites are typically artifact-rich and these artifacts help to understand the work performed, how much agency enslaved persons may or may not have had, their economic status, religious beliefs, family structures, and foodways. Since the written record of enslaved African-Americans is so sparse, there is a heavy reliance on the archaeological record for critical information. The previous work at the kitchen site has uncovered nearly 6,000 artifacts including buttons, kitchen utensils, worked bones, doll parts, coins and more. These artifacts provide insight into how the enslaved black community interacted with the white community of the plantation and surrounding city.

This project is important to Sandusky’s refocused mission of understanding its history of slavery. Critical to this project are its academic and public engagement components. University of Lynchburg students will be involved in several ways including helping with the field work, lab processing, researching and analyzing artifacts, writing blog articles, and creating both physical and online virtual exhibits of the artifacts and their interpretation. The public will be informed and engaged throughout the process. This includes regular social media and website updates, monthly sessions for the public to visit the excavation in progress and ask questions, virtual online discussions by archaeologists on the findings of the project to date and online Zoom presentations discussing the project’s findings. Lastly, a scholarly journal article on the project will be written and submitted to relevant journals for publication and a final technical report will be completed and made accessible via the internet. 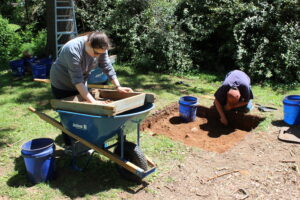 Archaeologists plan to fully expose the footprint of the kitchen structure and excavate all features within. This will be accomplished through excavating 16 additional 5ft. x 5ft. test units. Units will be excavated by hand and all soil screened through ¼ inch mesh. Any features discovered will be recorded and excavated. The fill from the subfloor pits and other select contexts will be excavated and wet screened separately to recover small artifacts such as beads and seeds.

Artifacts will be processed by University of Lynchburg students under direct supervision of Co-PI Jessica Gantzert in the archaeological materials laboratory on site. All charcoal, mortar, and brick will be weighed and discarded. Artifacts will be cataloged using a Microsoft Access database based on DAACS classifications and Virginia Department of Historic Reservation standards. Ms. Gantzert will also supervise students as they conduct a cross mending initiative to match ceramics and glass from this excavation with artifacts collected during the field school and previous excavation. Minimum vessel counts will be provided through this undertaking.
Significant iron and copper artifacts will be conserved on site at the Hurt & Proffitt metals conservation laboratory. 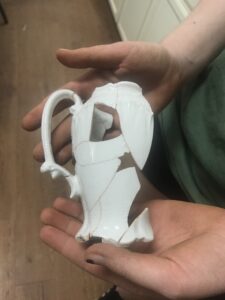 Artifacts will remain on site at Historic Sandusky and will be maintained by the foundation. A rotating display of artifacts is maintained at the museum visitor’s center.

When will excavations begin?

We expect to resume work in early spring 2022, but we are on the ground already and can start work rapidly if our donation goal is met sooner.

Who will be working on the project?

Mr. Lichtenberger and Ms. Gantzert are Co-PIs on the project, but most of the work will be conducted by students of the University of Lynchburg under direct supervision of the Co-PIs. Students will work on all aspects of  the project, from excavation to lab processing and finally to curation with assistance and supervision. The purpose of this is to give students valuable real-world experience in archaeology that they can use to help their academic and professional careers going forward, while also producing professional results.

Where can the public keep up with the excavation?